"sometimes people ask me: what is fulfillment in art?
i then falter and usually answer: cleaning the brushes after painting!"

*bundesrepublicana is a collective term invented by malte sonnenfeld for cultural creations of the society of the federal republic of germany, which in a broad sense establish or are connected to the folkloric traditions of the FRG. 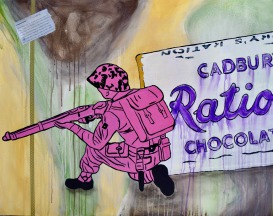 who is malte sonnenfeld?

"...by now he is known all over Germany for his colorful, comic-like and cryptic acrylic paintings..." (Kölnische Rundschau)
"The high-flyer" (Aachener Zeitung) has "made his mark on more than 50 exhibitions and various art fairs." (Focus online) and produces "colorful pop art" (WAZ) - "but his philosophical and philological insights have also flowed into his pop imagery" (Weser-Kurier Bremen). "Sonnenfeld is one of the best-known German neo-pop artists and is already counted among the important German artists." (Rhein-Zeitung) Furthermore, "...art connoisseurs consider (him...the ed.) a trailblazer with his Neo Pop Art." (Rheinischer Spiegel)

About Malte Sonnenfeld - What does Pop Art mean here?
by Andreas Cordes

When people talk or write about the works of Malte Sonnenfeld, the term Pop Art is always mentioned in order to trace his stylistic roots and his role models in terms of content. He is also often compared with the artist Sigmar Polke with the remark that both draw on the formal characteristics of this art movement.

Yet Sigmar Polke saw himself more as a critical German answer to American Pop Art and coined the term "Capitalist Realism" as early as 1963, together with Konrad Lueg and Gerhard Richter. An allusion to the official GDR designation "Socialist Realism" as the predominant art movement there. What connected these artists to Pop Art was less a bond over formal features than a critical view of mass consumption and unquestioning optimism about progress.

What does all this have to do with Malte Sonnenfeld's art?
If we look closely, quite a lot: for just as little as Sigmar Polke's works, his art cannot be reduced exclusively to stylistic aspects or variations on the meaning of Pop Art in terms of content. The reference to the artist's preference for comics also falls short of a characteristic classification.

Rather, Malte Sonnenfeld seems to have worked out his painting style in the artistic confrontation with the works of Sigmar Polke. Thus, as with Polke, his multi-layered works encompass a broad spectrum in the use of different painting techniques and painterly means of expression: in the ambivalent play of transparency and opacity, in the setting of contours between the development of form and dissolution, or in the contrasting interplay of spherical pictorial background and painterly brushwork, his pictorial worlds appear like fragments put together at random, which repeatedly condense into multi-layered ensembles.

This impression is reinforced by the technical artifice of collage, with which the spectrum in Malte Sonnenfeld's mode of expression extends far beyond classical painting. Thus, the pictorial grounds in his works are often covered with wallpaper, product packaging, or excerpts from poems and quotations on paper. A technique that makes us think not only of Sigmar Polke, but also of Nouveau Réalisme, which emerged as a European parallel phenomenon to Pop Art in the early 1960s. Particularly the painterly treatment of the picture carrier from subtlest color layers and vehement brushstrokes, reminds sometimes of the pictoriality of the poster tear-off pictures of the French artist Jacques Villeglé, a co-founder of the new realism.

The quintessence
From all these formal derivations in his pictorial design, Malte Sonnenfeld has developed his very own, very personal as well as complex and heterogeneous style. With his seemingly infinite cosmos of signs, his pictorial spaces appear to us more like search images or pictorial puzzles that allow the viewer to open up ever new spaces of memory.

Thus, Malte Sonnenfeld's works are neither to be understood as a pure examination of the consumerism of the masses, as in Pop Art, nor can they be interpreted as mere criticism of mass culture, despite the use of strongly ironic elements, as in Sigmar Polke's work. Nor do his works seek to bridge a gap between art and life, as the representatives of Nouveau Réalisme or Neodada demanded in their elitist-seeming "revolution of the everyday."

Rather, the artist brings icons from culture and politics as well as motifs, symbols, and signals from our world of media consumption and commodities into multifaceted contexts that tell his view of the world, but without moralizing or lecturing. With his typical and unmistakable wink, Malte Sonnenfeld keeps the viewer guessing, participating, and challenges us to perceive and recognize the images of the everyday cultural and media world as the collective memory of a real existing parallel world. Or, to conclude in the words of Pierre Restany, who announced the end of Nouveau Réalisme in 1963: "In the future, everyone can draw their own insights from this historical situation and bring their ideas together with the facts."

Andreas Cordes studied art history and philosophy in Osnabrück. He is a founding member of the Kunstverein Nordhorn e.V. and works as a freelance web designer and art historian. 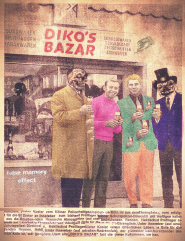